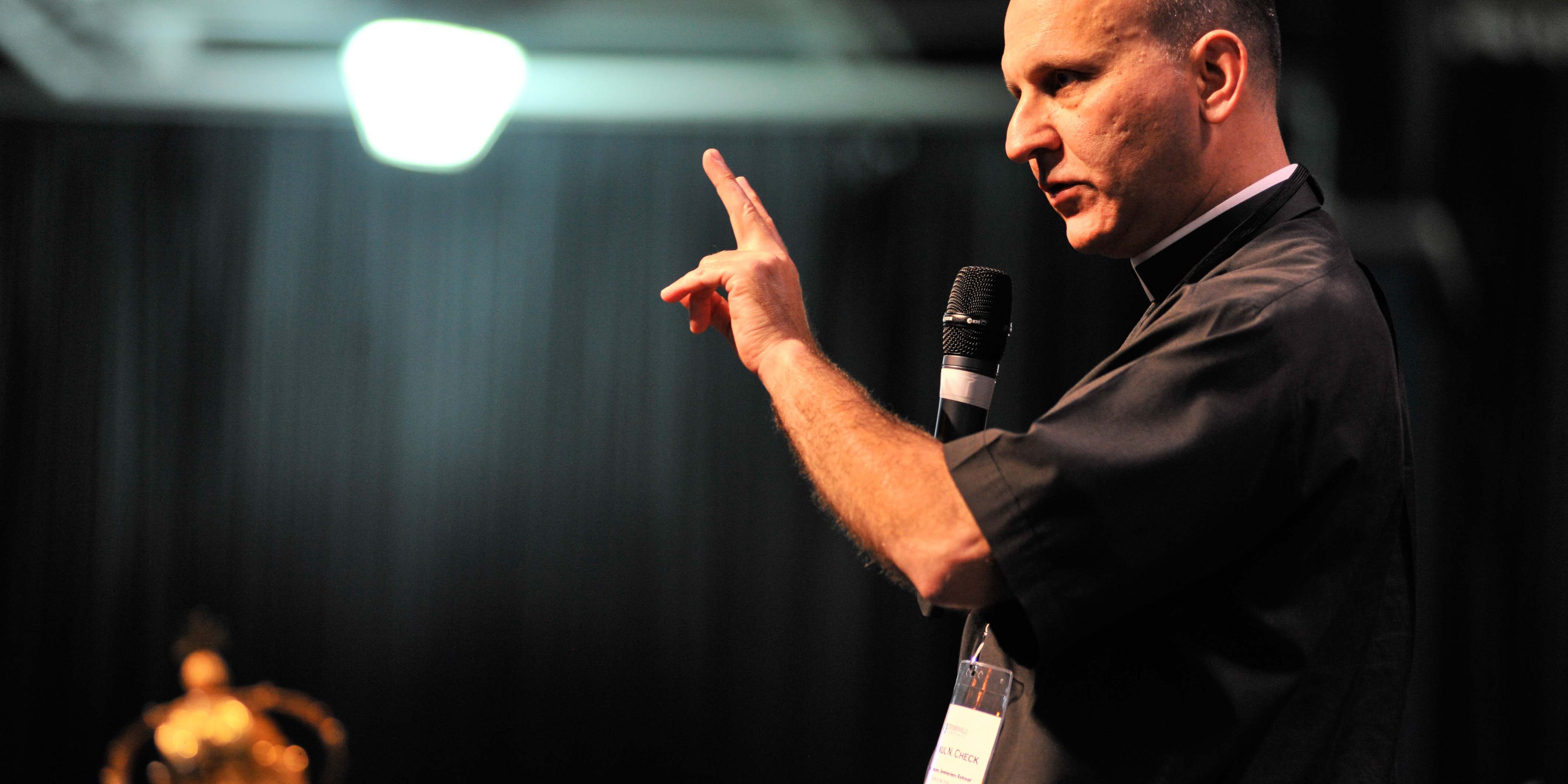 STEUBENVILLE, OH – “Will the worst sinner in the room please stand?” asked Bishop Edward B. Scharfenberger of the diocese of Albany. Most of the men in the room rose to their feet. The bishop walked down the center aisle looking at 192 priests, deacons, and seminarians representing 30 states. “If you think that you are the worst sinner in the room, God is calling you to be a saint.”
The Priests, Deacons, and Seminarians Retreat, held June 20-24, 2016, at Franciscan University of Steubenville featured inspirational talks, Mass, eucharistic adoration, reconciliation, and opportunities for quiet reflection and personal prayer.
Bishop Scharfenberger took the opportunity to speak specifically about mercy in his talk, “Meeting the Real Jesus in my Personal Brokenness.”
“I have a worry,” he admitted to his audience. “I was really happy when the Pope declared a year of mercy . . . but what’s going to happen when they close the door of mercy?” He said his response was to consecrate his diocese to divine mercy and reflect on how he could become a portal of mercy to the world beyond November 20, 2016 when the Jubilee year closes. “Let the end of mercy open up to the works of mercy. Let us become the door of mercy by accepting forgiveness, and let go of fear and sin. Let us receive his mercy.”
Dr. John Bergsma, a theology professor at Franciscan University, spoke on “Confession as a New Exodus: Experiencing God’s Deliverance.”
Bergsma talked of the power of confession and shared his testimony on how he felt called to confession as a former protestant minister, realizing that confession is a biblical commandment and there is no way he could fulfill that call of the Lord and the hunger of his heart without “falling to the Catholic way.”
He read James 5:14-17: “Is anyone among you sick? Let them call the elders of the church to pray over them. . . . If they have sinned, they will be forgiven. Therefore confess your sins to each other and pray for each other so that you may be healed. The prayer of a righteous person is powerful and effective.”
“The confessional is spiritual warfare,” Bergsma said. “It is deliverance. . . . If you want vague grace, say a vague confession. If you want abundant grace, have a honest, true confession.”
Following Bergsma’s talk, participants heard each other’s confessions.
Father Jonathan Morris, a Fox News analyst, author, and a priest for the Archdiocese of New York, spoke Wednesday evening on “Pastors of Mercy or Messengers of Truth.”
In 2015, Father Morris was assigned to Our Lady of Mount Carmel Church in the Bronx, an area beset by crime and poverty. Father Morris shared how he ministers to his parishioners and meets them where they are.
“We can’t be afraid to enter into people’s darkness with them,” said Father Morris. “We don’t have to worry about being the ultimate judge because we are not God.”
Deacon Ralph Poyo and Deacon Craig Anderson led the deacons track and spoke on “Deacons in a Broken World: Serving with Love and Truth.” They shared experiences they’ve had ministering to people outside of their parishes, Anderson as a firefighter in the San Francisco Bay area and Poyo as a traveling parish evangelizer. They offered tips on how to be humble, merciful, and joyful in their ministries.
“We have to be willing to go to the people,” said Poyo. “We have to be willing to engage. . . . Ask the Lord in prayer, ‘Am I living the deaconate the way you want me to or the way I want to?'”
First-time conference attendee Father Sojan George, who traveled from Wichita Falls, Texas, felt empowered by the speakers and the opportunity to remove himself from the world to encounter the Holy Spirit.
“This was unlike any other retreat I have been to,” said Father George. “The five days went so fast . . . but it gave me time for personal prayer and reflection on my role as a priest.”
The retreat was hosted by Father Dave Pivonka, TOR, a nationally known speaker, author, and pilgrimage leader. Praise and worship was led by Franciscan University catechetics professor and musician Dr. Bob Rice.
Father Paul Check, executive director of Courage International, spoke on “Homosexuality and the Catholic Church: Charity and Clarity.” Other speakers included Caroline Gambale-Dirkes, John Beaulieu, David Prosen, Father Frank Black, Father Tom Valenti, and Dr. Scott Hahn.
This year, Franciscan University of Steubenville’s Christian Outreach Office will offer 5 adult, 4 young adult, and 23 youth conferences in 14 states and 2 Canadian provinces expected to reach nearly 60,000 people. Visit steubenvilleconferences.com for a complete list of conferences.