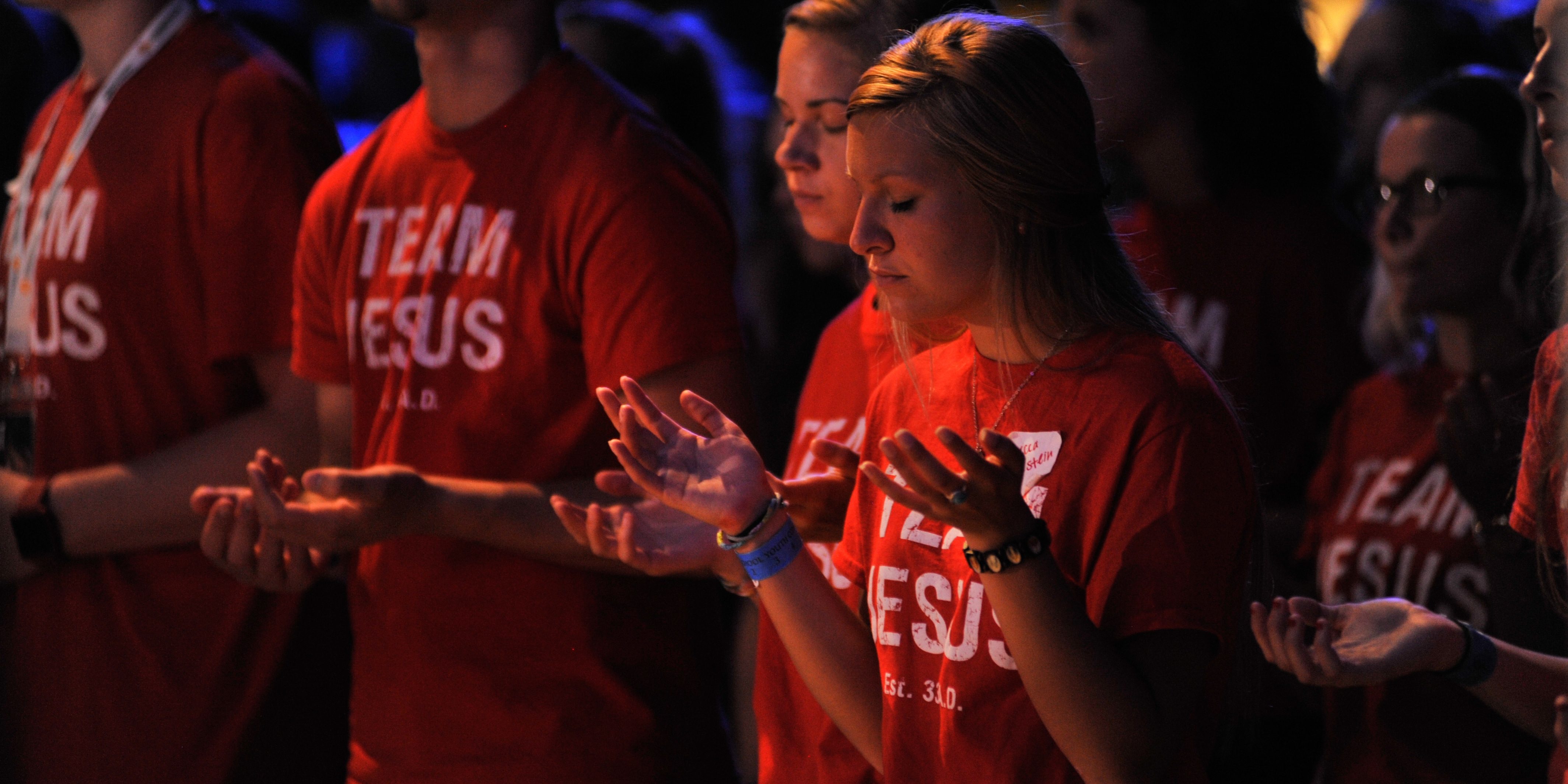 STEUBENVILLE, OH – “It is Jesus that you seek when you dream of happiness. He is waiting for you when nothing else you find satisfies you. He is the beauty to which you are so attracted. It is he who provoked you with that thirst for fullness that will not let you settle for compromise.”
Quoting St. John Paul II, Matt Fradd spoke quietly but with passion as 2,200 teenagers sat in near darkness, awaiting the start of eucharistic adoration. Jesus would soon be in the room, and Fradd wanted to make sure each teen was ready for a personal encounter with Christ.
Thus began the Main Campus High School Youth Conference at Franciscan University of Steubenville. The June 17-19 conference marked the beginning of 23 youth conferences to be held across the U.S. and Canada this summer.
Fradd, a Catholic apologist and executive director of The Porn Effect, said in his talk Saturday night that everyone has a hunger for God but often “we take that hunger that God has placed within us for himself to lesser things.”
Quoting Jeremiah 2:1—”My people have committed two sins: They have forsaken me, the spring of living water, and have dug their own cisterns, broken cisterns that cannot hold water”—Fradd asked, “What are your broken cisterns? What is that thing that you turn to when you feel anxious and awkward and bored and life is chaotic. When we turn to these things in a sort of addictive, compulsive way, it never satisfies our heart.”
“Prayer is the encounter of God’s thirst with ours,” Fradd continued. “Thirst for him, hunger for him. If you don’t know how to do that, say, ‘Blessed Lord, awaken in me a thirst for you.'”
Expanding on the weekend theme of “I Thirst,” host Steve Angrisano, a nationally known musician, composer, and youth minister, explained, “The way our bodies thirst for water, so our souls, our spirit, thirsts for God.” He was joined by Dr. Bob Rice, Franciscan University catechetics professor and singer/songwriter, who led praise and worship.
Over the weekend, the youth attended workshops, engaged in small group discussions, and attended Mass, adoration, and the sacrament of confession.
Speaking at one workshop on “The Path to Authentic Life,” Father Joe Freedy, formerly a standout quarterback for the University of Buffalo and now director of priestly vocations for the Diocese of Pittsburgh, described his own journey toward authentic living.
“We desire crazy adventures,” he said. “This is what we’ve forgotten. We’ve forgotten the adventure it is to follow Jesus. We’ve made following Jesus Christ lame and boring and burdensome. Jesus invites you to risk. He invites you to walk on water.”
Father Freedy, speaking to a large crowd gathered in the Glory Tent, went on to say that following Christ can hurt, but rather than taking away the hurt, God “enters into the hurt of life, into the ache of life, and makes a resurrection out of it.”
At a workshop on “Love, Same Sex Attraction, and Tolerance,” Chris Mueller, president and founder of 242Revolution Ministries, spoke a message of love for those struggling with a same-sex attraction.
He said, “You don’t earn God’s love. God loves you, but there’s nothing you can do to earn it. There’s nothing you can ever do to get rid of it. . . . We are God’s children. That’s who you are. You can’t undo that.”
“Do you know why we’re attracted to each other?” he continued. “It’s because we see God. It is natural that we should be attracted to each other, but any sexual act that is not open to life is intrinsically disordered. The natural order of our sexuality is toward life.”
Mueller also warned against creating division through terminology referring to those struggling with same-sex attractions, saying “The reality is that we’re people. So if you’ve got same-sex attraction and I’ve got opposite-sex attraction, we’re still people, we’re not two different species. . . When we begin to label ourselves that way, we become “us” and “them.”
Sister Miriam James Heidland, SOLT, a former Division-I volleyball player for the University of Nevada-Reno, spoke on wanting to “domesticate Jesus . . . because we’re so afraid of what has to be done to the darkness inside that Christ wants to bring his light into.”
She continued, “Christianity is not a behavior modification program. It’s not sin management. And we’re not here to be good little girls and little boys and sent home on our way. Christianity is the method, the life of Christ who’s come to set us free and transform us into the abundant life we so earnestly desire. God’s not going to do that for us if we don’t let him.”
This year, Franciscan University will offer 5 adult, 4 young adult, and 23 youth conferences in 14 states and 2 Canadian provinces expected to reach nearly 60,000 people. Visit www.steubenvilleconferences.com for a complete list of conferences.