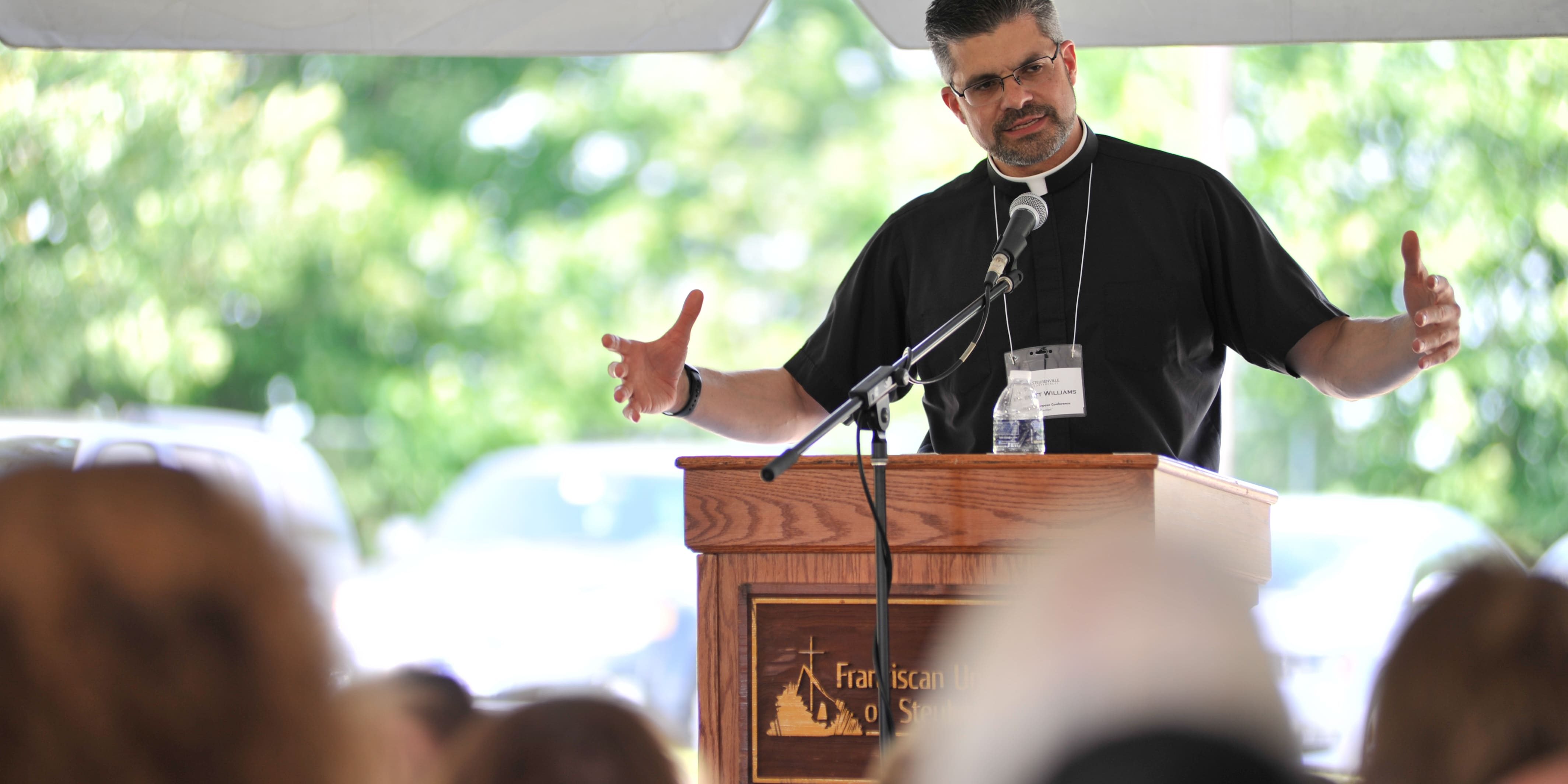 STEUBENVILLE, OH –  “We are created for worship, and now it’s time for the Church to awaken,” declared Father Matt Williams at the June 10-13, 2016, Power and Purpose Conference at Franciscan University of Steubenville. “It’s time to awaken to the truth of who God is and who you are.”
Father Williams is the director of Faith Formation and director of the Office for New Evangelization of Youth and Young Adults for the Archdiocese of Boston. He spoke about the power of worship, calling the audience to make a strong effort to develop a prayer life and find a community of Catholics who can support them as they live in a secular society.
“We were created for worship: body, mind, and soul. If we don’t worship the one true God, we will worship other things,” said Father Williams. “When we worship God, we make a sacrifice… an offering of our wills, our hearts, and our lives.”
The conference theme was “Awaken,” and it drew over 700 participants from 33 states. It featured a full schedule of talks and workshops, daily Mass, the opportunity to receive the sacrament of reconciliation, and a holy hour and healing service led by Father Williams.
First-time attendee Melissa Stack of Columbus, Ohio, who traveled to the conference with her mom felt particularly moved during the holy hour. “Father Matt was not afraid to approach people with the monstrance. We consume Christ in the Eucharist but seeing him come around and move through the crowd like that moved me to tears,” she said.
Deacon Ralph Poyo, founder of New Evangelization Ministries, gave a wake-up call about how to approach Mass every Sunday in his talk “Making the Source the Summit.”
“We suffer. We exclude God…Where do we get replenished? Well, it comes back to here,” said Poyo, gesturing to the altar on the stage. “What is happening here? Communion. A union between us and God. We have an opportunity to offer up our bodies as a sacrifice.”
He argued that being attentive at Mass was one of “the greatest battle grounds of the Church.”
“The days are coming where we have to fight…so we can be in union with our beloved,” he said.
To illustrate our sacrificial relationship with God, Poyo described traditional Jewish marriage customs from the time of Christ and compared them to Christ taking the Church as his bride through the Last Supper, his suffering, death on the cross, and resurrection.
“Deacon Ralph’s message absolutely rings true,” said Lorriane Sarver, of Cranberry, Pennsylvania, who has been attending Franciscan University conferences since “they were in the tent.” “What he said about Mass needs to be heard by all Catholics. If all Catholics understood that, the Church would be so alive.”
Dr. Ralph Martin, author and president of Renewal Ministries, spoke about his deep concern for the baptized Catholics who approach the Church “not with the mind of Christ but with the mind of the world and the spirit of the age.”
“When we are faced with overwhelming obstacles…we just have to say, ‘Jesus, I trust in you,'” he said, referencing St. Faustina’s revelations on divine mercy. In the midst of this problem, he said, the Lord is proclaiming mercy without limit. Martin urged the audience to read St. Faustina’s diary and get to know the divine mercy message and challenge the spirit of the times.
“We have to be willing to take the risk of speaking the truth in love, even when it may be rejected,” he said.
Debbie Herbeck, convert to Catholicism from Judaism and founder of the Be Love Revolution, invited the audience to ponder what they want to have written on their tombstone. Before her conversion, she admitted to a fear of what happens after death that came to a peak with the death of her older brother when she was in college. Through the story of Jesus raising Lazarus from the tomb, she realized that through death, she can inherit the kingdom of God.
“Death isn’t the final answer,” she said. “Love is stronger than death, and He holds the power to conquer death.”
Father Dave Pivonka, TOR, answered Herbeck’s question saying he wanted his tombstone to read, “Dave said yes” and invited the audience to say yes as well. He shared his testimony, remembering a time when he refused to accept the Lord’s prompting to minister to a woman in the grocery store and the guilt that followed.
“The desire of my heart has been for a long time to say yes to the Lord,” he said. “What happened to Jonah? He said no to the Lord and gets swallowed by a fish.”
Father Pivonka, producer of the Wild Goose webseries and director of Franciscan Pathways, the evangelistic outreach office of his TOR community, also referenced the rich young man in the Gospel who asked the Lord how to seek the kingdom of God then said no because he didn’t want to give up his many processions.
“In the times I have chosen not to say yes, I think it’s often times out of fear,” he admitted. “It’s a fear of what it’s going to mean…There is something about fear that inhibits us from doing what the Lord is inviting us to do.”
This year, Franciscan University of Steubenville’s Christian Outreach Office will offer 5 adult, 4 young adult, and 23 youth conferences in 14 states and 2 Canadian provinces expected to reach nearly 60,000 people. Visit steubenvilleconferences.com for a complete list of conferences.